Iron is one of the important trace element found in human body that actively participates in various metabolic pathways, particularly erythropoiesis and neurodevelopmental processes.[1] Being an important micronutrient for neurodevelopment, dietary iron becomes an utmost vital nutritional component during infancy. Deficiency of dietary iron in early infancy/childhood results in depletion of iron stores in the body that could later result in modification of sensorimotor, cognitive/language, social/emotionaland psychological / behavioural activities in new-borns.[2]Therefore, maintaining iron stores in the body is essential for achieving optimal neural development of babies. ‘Complementary feeding’ serves as an important tool in maintaining and replenishing the iron stores in infants.

Depletion of Iron stores in the body

The iron stores present at the time of birth gets rapidly consumed during first few months of life that exposes new-borns to the risk of developing iron deficiency and anaemia during infancy. The risk of having iron deficiency is particularly higher in preterm infants. Scientific evidence suggests that full-term infants have sufficient hepatic iron reserves for growth and development and do not require supplementation during the first six months of life. However, the iron reserves of preterm infants being comparably less than full term infants, exposes them to greater risk of iron deficiency even during first six months of life. [7] Iron deficiency during infancy could negatively affect the neurodevelopment and haemoglobin status of the baby. The global prevalence of iron deficiency anaemia (IDA) ranges from 25 to nearly 100% among infants; while majority of countries report prevalence rate greater than 70%. [9] As suggested by data from the National Family Health Survey (NFHS) III in India, the prevalence of IDA is as high as 70% among children less than five years of age.[10] Whereas, the prevalence rate of IDA surges to 79% for children under three years of age, indicating vulnerability of IDA in this age group. [10] Severity of IDA among children from age six months to thirty-five months usually vary from mild, moderate, severe, any anaemia (figure-1). [10, 11] 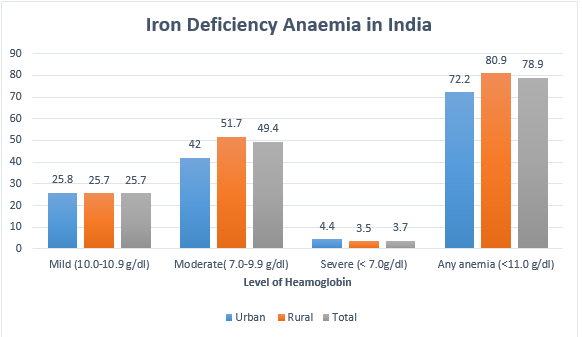 Requirement of Iron during infancy

Till 6 months of life, iron present in the human breast milk is well absorbed by infants and is sufficient for the formation of heme. However, with marked increase in the nutritional requirement, it is suggested that iron-enriched solid foods should complement breast milk from 7 to 12 months of age. Considering the fact that iron is an essential component required for proper neurodevelopment and physical activity in infants, the Indian Council of Medical Research (ICMR) has recommended dietary allowance (RDA) of iron in infants (Table-1).

Source: Adapted from NUTRIENT REQUIREMENTS AND RECOMMENDED DIETARY ALLOWANCES FOR INDIANS A Report of the Expert Group of the Indian Council of Medical Research, 2009

Breast milk despite being low in iron content is sufficient to meet the iron requirement of the baby till first six months of life. After the initial six months of life, the iron stores in body of the infant starts depleting fast. Hence, it is recommended that iron enriched complementary food should be given to all the infants along with breast milk after six months of age. [17]
Dietary iron from animal sources (red meat, fish, animal liver, egg yolk) and plant sources (pulses, beans and cereals, green leafy vegetables, peanut butter, iron fortified cereals) can be easily included in daily meal plan of an infant as per choices and preference.

However, it was found that the bioavailability of iron i.e. amount of the ingested iron absorbed and utilized by the body is significantly higher in animal sources (up to 22%) as than in plant sources (1-6%) of iron. [17] Dietary iron from animal and plant sources is absorbed better in presence of fructose, and ascorbic acid; while egg yolk, milk, tea or coffee reduces its absorption. Therefore, a diversified diet with reasonable proportions of animal and plant food products along with food products rich in ascorbic acid (25-75mg) is recommended to meet the iron requirements of infants. [17] Complementary food served to an infant should be in sync with iron density recommended for that age group (Table-3). [17] 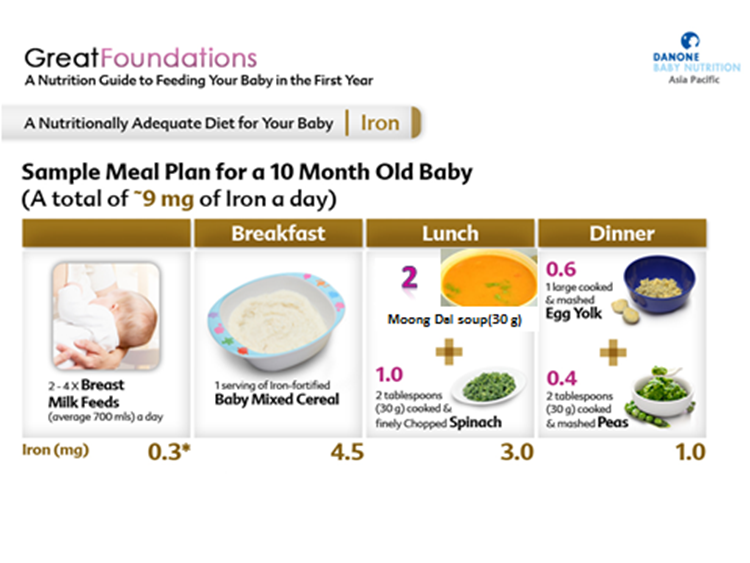