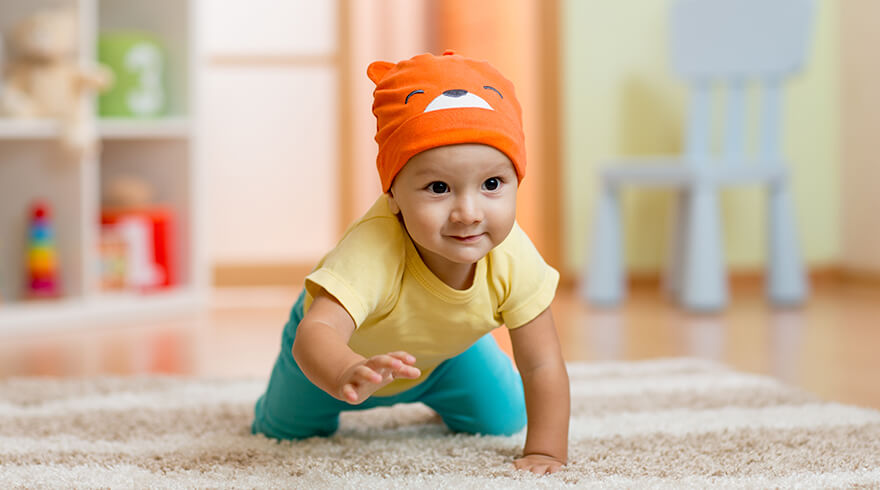 Gut microflora has a critical role in providing immunity, improved digestion, and resistance to pathogenic infections.1 The gut microflora differs in composition and diversity among breast-fed and formula-fed infants.2 A major innovation is the modulation of the microflora through diet; a community of beneficial microbes can be obtained by adding prebiotics in infant feed.2 This article discusses prebiotics and their bifidogenic effect in infant feed.

Although prebiotics is a relatively new term, foods rich in prebiotics have been consumed since ancient times.3 Prebiotics were primitively defined as non-digestible food components that selectively stimulate the growth and/or activity of beneficial bacteria, thus improving host health. However, the definition was refined to “a selectively fermented ingredient that allows specific changes, both in composition and/or activity in the gastrointestinal (GI) microflora that confers benefits upon host well-being and health”.3,4

Prebiotics must have the following characteristics:

The colon microflora is a metabolically active and complex ecosystem with a major role in protection against exogenous and pportunistic bacteria, immunity, and overall well-being of the host.1 The colon provides nutrients and favorable pH and has a slow transit time aiding in the growth of bacteria. Bacteria having saccharolytic activity, such as Lactobacilli and Bifidobacteria are considered beneficial.3 The microflora present in the colon and on the mucosal lining act as a barrier to pathogenic bacteria and protect the gut epithelial integrity and thus the GI tract.3 They confer colonization resistance, improved digestion, SCFA production, antioxigenic activity, and immunity.1 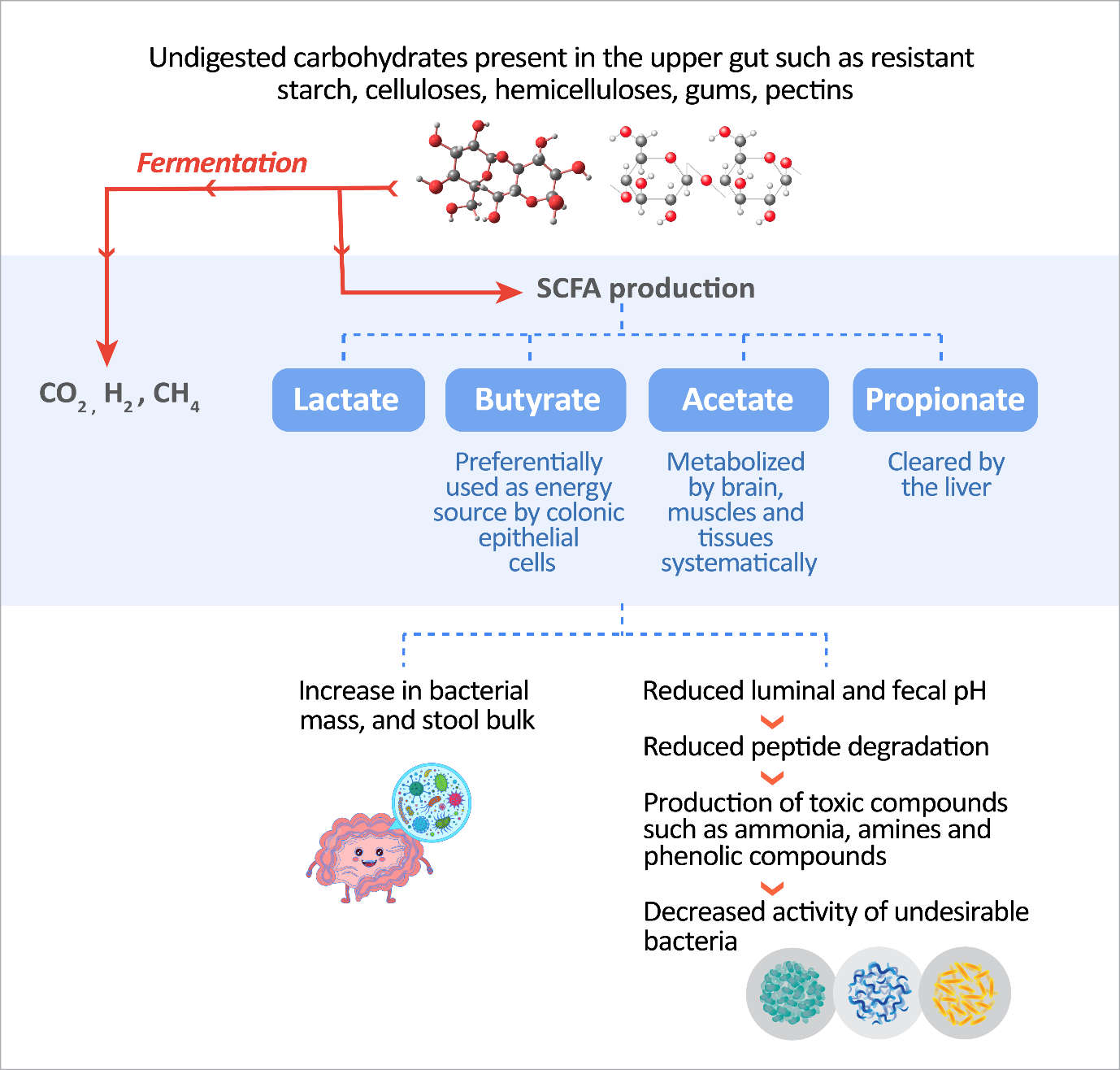 Role of prebiotics in gut health

In the last few decades, the role of microflora in the maintenance of gut health has been recognized, and modulation of the gut microbial composition has been an area of interest.1 The growth and promotion of beneficial community of microbes by using functional foods such as prebiotics has been encouraged in recent years.1 Prebiotics have the potential to prevent and cure intestinal dysfunctions, inflammatory bowel disease, gastro-intestinal infections, and colon cancer.5 They have also demonstrated beneficial effects in the alleviation of constipation.5

Bifidogenic Effect Of Prebiotic Oligosaccharides in Human Milk and Others

Human milk contains several proteins such as lactalbumin and lactoferrin and non-protein nitrogen fraction that have a ‘bifidogenic effect’.6 Evidence suggests the role of oligosaccharides in human milk in the post-natal development of gut microbiota. Since the human intestine lacks luminal enzymes that cleave the alpha-glycosidic bonds of fucose and sialic acid, and the beta-glycosidic bonds present in the core molecule, oligosaccharides in human milk are resistant to enzymatic cleavage. However, they are metabolized by intestinal bacteria that produce glycosidases.6

The microflora in breast-fed infants are known to produce high amounts of lactate and acetate thereby restricting the growth of E. coli and Clostridium perfringens. Whereas, microflora in infants fed with infant feed produce high amounts of butyrate and propionate.2  This difference is likely contributed by the complex neutral oligosaccharides of breast milk that confer ‘prebiotic’ effect and stimulate the growth of bifidobacteria in infant gut.2 A similar approach can be carried out by supplementing infant nutrition with prebiotics that stimulate the growth of favorable intestinal bacteria.

In the 1950s, infant feeds were supplemented with lactulose, a bifidogenic ingredient. However, due to its laxative effect at high doses, it has been replaced with fructo-oligosaccharides (FOS) and galacto-oligosaccharides (GOS) presently.1 Their beneficial effects on adult gut health have been demonstrated in several studies. This may also suggest their potential in establishing gut flora rich in Bifidobacteria and lesser harmful bacteria in infants when given in moderate amounts.1 Several reports have indicated that using a mixture of short-chain GOS and long-chain FOS in the ratio of 9:1 in infant feed can help to achieve the prebiotic effect closer to that observed in breast-fed infants. Studies indicate that the number of Bifidobacteria and lactobacilli counts increased significantly with GOS/FOS-containing formulations.2,7-9

A clinical study was carried out with the objective to investigate the effect of prebiotics in infant feed on the composition and metabolic activity of infant gut microflora.2 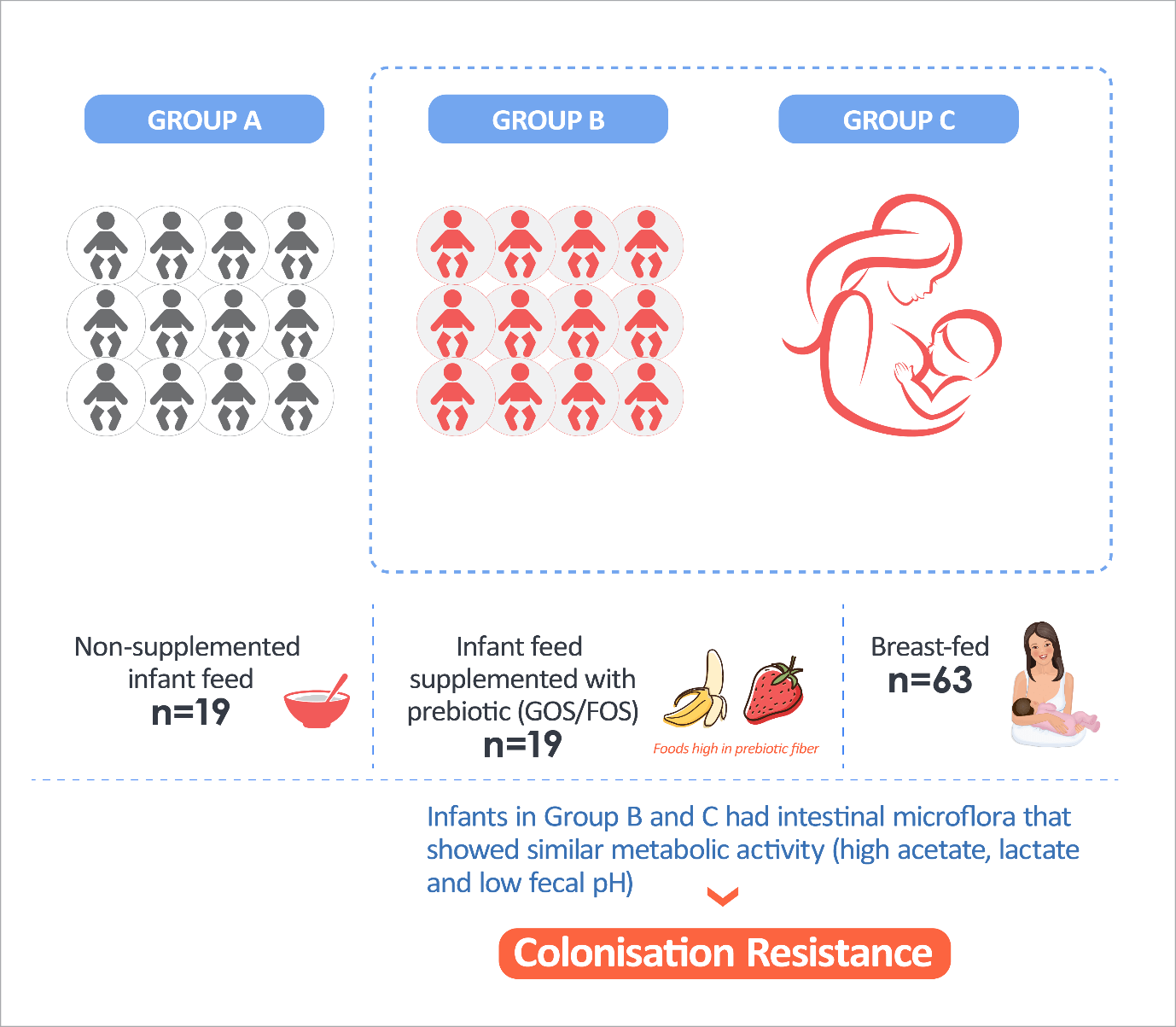 This study demonstrated that infant feeds containing GOS/FOS mixture provide a prebiotic effect and stimulate the growth of microbes that produce relatively high amounts of fecal acetate and lactate, and low fecal pH. 2 This consequently creates less favorable conditions for Enterobacteriaceae and other opportunistic pathogens.1

In a nutshell, in case the infant is unable to be breast-fed, the intestinal microbiota as that seen in breast-fed infants can be mimicked to a certain extent by using dietary ingredients such as prebiotics which help stimulate the colonization of health-promoting microbes.6