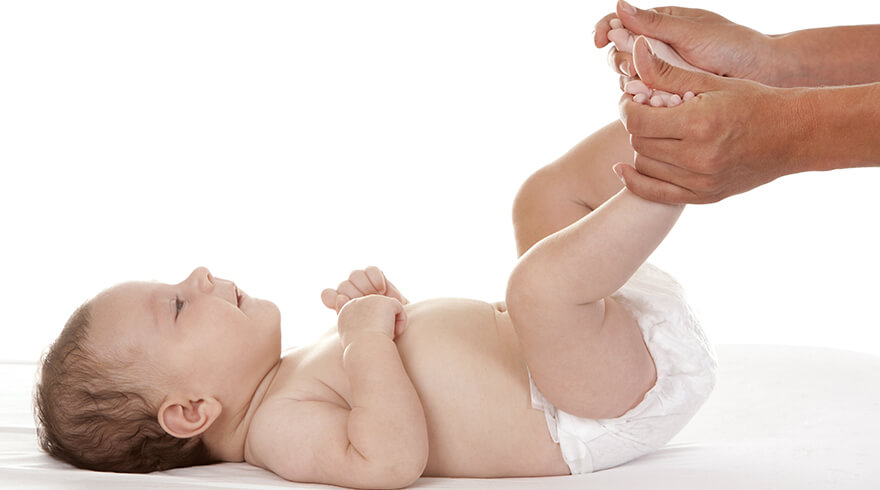 Pattern of Gut Colonization in Infants

Although gut colonization begins when the fetus descends in the lower uterus, it is completely established only after birth, accompanied by two major transitions. The first transition occurs immediately after birth, during lactation and is dominated by Bifidobacterium. Later, during weaning and introduction of solid foods, Bacteroidetes and Firmicutes dominate the gut2. The early development of gut microbiota depends on several factors such as type of delivery, type of feed (breast vs. formula), use of antibiotics and timing of addition of solid foods2. 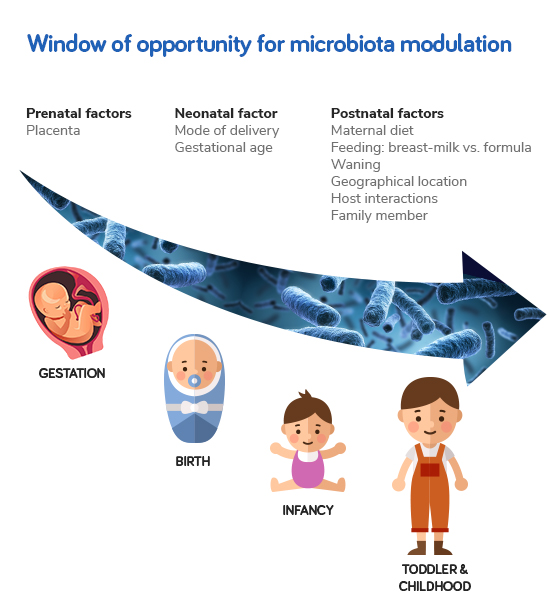 Microbial gut colonization in intestine influences the development and physiology of the immune system and impacts health and disease, later in life2. Thus, the first 6 months after birth are identified as a 'window of opportunity', during which contact with certain microbial associated molecular patterns (MAMPs) is crucial for infant gut maturation3.

At birth, the intestinal lumen is aerobic and facilitates the growth of only facultative anaerobes like the Enterobacteriaceae family. Within days, the lumen turns anaerobic and supports the colonization of strict anaerobes such as Bifidobacterium, Clostridium, and Bacteroides1. In the first few weeks, microbial taxa from maternal skin and vagina like Enterococcaceae, Lactobacillaceae, Streptococcaceae, Bifidobacteriaceae, andClostridiaceae dominate the infant's gut.

In the next few months, with infants being on an exclusive feed of milk, oligosaccharide fermenters of milk, like Bifidobacterium propagate and become the most prominent species in this stage1. The intestinal microbiota further changed with weaning and/or the initiation of solid foods made up of complex carbohydrates that cannot be digested by host enzymes. It leads to an increase in Bacteroides, Ruminococcus, Clostridium, and a decrease in Enterobacteriaceae and Bifidobacterium. In the following 12-30 months, the composition of infant gut microbiome shifts towards adult microbiota with a predominance of Ruminococcaceae, Lachnospiraceae, Bacteroidaceae, and Prevotellaceae. 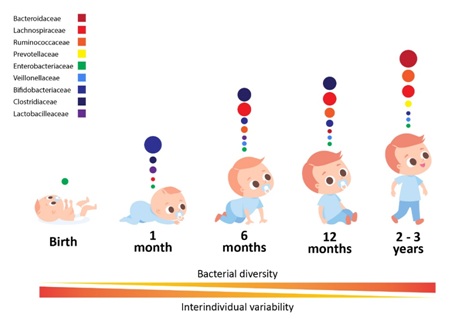 Figure 2: Stages of microbial colonization of the infant and child intestine.
Predominant bacterial families are depicted in circles, where the size of circle is proportional to the relative abundance of bacterial families at each growth stage
(Adapted from Arrieta et al., 2004)1

Composition of the Gut Microbiome

Though a large variation is present at the intraindividual level, the infant’s gut is populated predominantly by the following groups:4

Prevalence of Bifidobacterium in Immunity and Gut

As stated, Bifidobacterium is the predominant species in the infant’s gut4. They belong to the phylum Actinobacteria and were first isolated in 1899 from the fecal matter of a breastfed infant4. Bifidobacterium increases the nutrient absorption in the intestine via producing lactate and acetate and reducing luminal pH3. They also interact directly with the developing immune system and prevent the infant gut by promoting immunological and inflammatory responses, and modulating infant gut mucosal barrier function. The research suggested that improved T-cell response to vaccines and lower neutrophilia at 15 weeks was linked with increased counts of Bifidobacterium species3.

Children living in low-and middle-income countries (LMIC) are affected by adversities like malnutrition, poverty and maternal stress which can adversely impact the intestinal microbiota. Dysbiosis of the intestinal microbiota is characterized by reduced microbial diversity and increased pathogenic bacteria which may lead to stunting, diarrhea, and malnutrition in children5. Intestinal colonization varies with gestational age. Evidence suggests that LMICs have greater rates of malnourishment with lower rates of breastfeeding. Further, reduced HMOs in the breast milk of mothers may lead to stunting in children5. With a higher incidence of infections in infants and mothers in LMIC, exposure to antibiotics is also likely to be higher. Infants exposed to antibiotics are likely to have lower numbers of Bifidobacterium and Lactobacillus and higher prevalence of phylum Proteobacteria5.

What are the factors to be kept in mind for effective gut colonization in infants in developing countries like India?

Infant gut microbiota is an important factor in governing infant health and affects overall health in the future. Several factors like a vaginal delivery, breastfeeding, and use of antibiotics may impact the composition of intestinal microbiota and thus, infant health6.