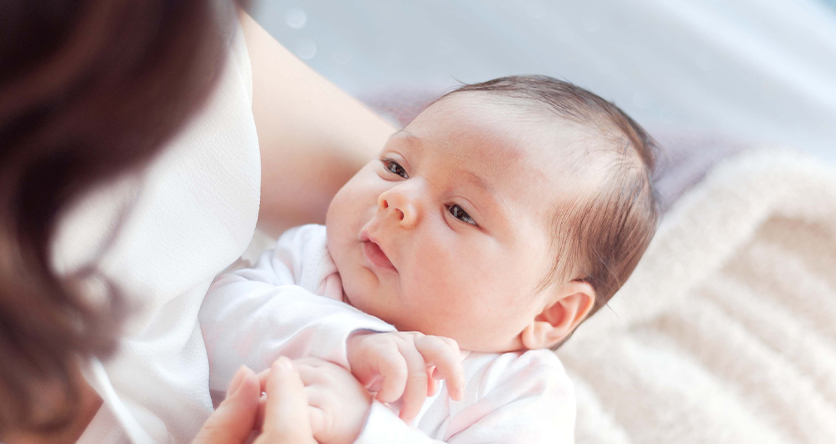 HMOs are essential components of human milk that have both direct communication with the immune cell, and probiotic capability3. A dietary intervention supplemented with Galactooligosaccharides (GOS) and fructooligosaccharides (FOS) (9:1 [weight/weight]) can function as prebiotic and has an immunomodulatory effect similar to HMOs1,3,4. This article reviews the impact of feed supplemented with prebiotic GOS/FOS mixture on the immunity of infants.

Dietary intervention with GOS and FOS: Impact on an infant’s immune system

Evidence suggests that interaction between the intestinal immune and epithelial cells, and the intestinal microbiota plays an essential role in the post-natal immune system development. Balanced gut flora is mainly colonized with lactobacilli, and bifidobacteria is vital to educate and expand the immune system in early life2,3. Clinical studies in preterm and term infants have found that feed supplemented with a prebiotic mixture of GOS/FOS produces an intestinal microbiota similar to that reported in breast-fed infants3. It was also found that the prebiotic GOS/FOS mixture enhanced the count of bifidobacteria2.

Owing to the ability of prebiotic GOS/FOS mixture to establish a balanced microbiota, it can play a significant role in the development of the immune system2,5. Clinical studies have indicated that dietary intervention with GOS/FOS increased the concentration of fecal secretory immunoglobulin A (sIgA) in infants after 26 weeks. This finding suggests the beneficial effect of the GOS/FOS mixture on mucosal immunity5. 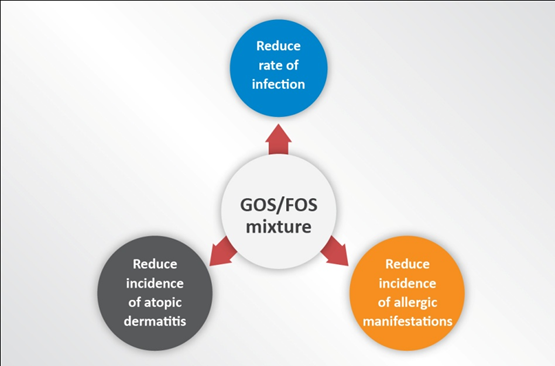 Effect of GOS and FOS on immunity: Clinical evidence

Numerous clinical studies have shown the preventive effect of GOS/FOS mixture on the occurrence of infection. Some studies have been summarized below (Table 1).

Early nutritional intervention with prebiotic GOS/FOS mixture is effective in reducing the incidence of atopic dermatitis and other allergic manifestations as indicated through a randomized trial (Figure 2)3.

GOS/FOS has been reported to enhance beneficial antibody profiles. A double-blind, randomized study was conducted on 84 healthy term infants at risk for allergy, to evaluate the effect of GOS/FOS on the immune response. Infants were divided into placebo (n=43) and GOS/FOS (n=41) groups. The result indicated that GOS/FOS supplementation led to a significant decrease in the plasma level of IgG1, IgG2, IgG3, and total IgE. Reduction in cow’s milk specific IgG1 was also observed. Overall, the GOS/FOS mixture modulates the immune response toward cow’s milk protein (CMP)without affecting response to vaccination6.

Prebiotic oligosaccharides like GOS/FOS mixture can mimic the immunomodulatory function of HMOs and support establishing an infant’s immune function1,2.