Human milk is the ideal nutritional source for all newborns1. In addition to the macro- and micronutrients, it contains many distinct bioactive molecules that have shown beneficial effects on the development of gastrointestinal, immune, and brain systems2. Thus, breast milk is considered as the best biological fluid for optimum growth and development of infants2. This article reviews the beneficial effects of human milk bioactive molecules such as oligosaccharide on the gut and immune health of infants.

Human breast milk is composed of approximately 1.0% protein, 3.8% fat, 7.0% lactose, and 87% of water2. It also contains various bioactive molecules such as growth factors, cytokines, hormones, antimicrobial factors, etc. that impacts infant immunity, and provides protection against allergic reactions and chronic diseases3. Oligosaccharides found in human milk are one such group of bioactive molecules that are synthesized from lactose in the mammary gland1. They are the third-major constituent of the maternal milk after lactose and lipids, hence, are recognized as a key element3. They possess prebiotic, anti-inflammatory, glycome-modifying and anti-adhesive and play a significant role in the development of gut microbiota and maintenance of immune health of infants.2,4

Human milk contains a wide variety of oligosaccharides that differ in their amount and composition among individuals5.  About 200 structures of oligosaccharides have been identified3. These oligosaccharides are primarily made up of five major building blocks that include D-galactose (Gal), D-glucose (Glc), sialic acid (Sia), L-fucose (Fuc), and N-acetylglucosamine (GlcNAc). They contain lactose at their reducing end which can be extended by galactosylation and/or by N-acetylglucosaminylation with or without fucosylation and/or sialylation6. Besides lactose, ≥15 linear or branched neutral oligosaccharides have also been recognized as core structures of other HMOs3,6. Based on their abundance, HMOs are divided into three categories:3

Impact of oligosaccharides on gut and immune health

HMOs are indigestible and reach the colon intact where they act as a nutritional source for the bacteria present in the intestinal flora. Besides their ‘prebiotic effect’ (enhancing the growth of favorable bacteria), they also have several other benefits for the host3, which are summarized below: 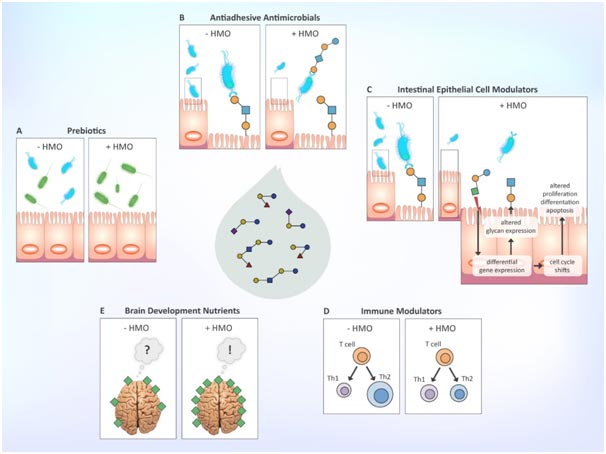 Antimicrobials and Antivirals: Prebiotic oligosaccharides in breast milk prevent infections in newborns by mimicking the glycan structures present on the surface receptors of the gut epithelium and reduce the binding of pathogens on these receptors for colonization.6 They may also act as inhibitors for the toxins released by bacteria. Both neutral and acidic oligosaccharides have shown anti-infective properties in infants. 6,7

Intestinal epithelial cell modulator: Evidence suggests that prebiotic oligosaccharides promote gut maturation via interacting with glycans present on the epithelial or dendritic cell surface. They also contribute to the barrier integrity by increasing the growth of Bifidobacterium.6,7 A study conducted to find a link between levels of 2-linked fucosyloligosaccharides (FOS) in breast milk and moderate-to-severe diarrhea demonstrated that the incidence of diarrhea in infants was inversely related to levels of FOS.3 Moreover, some oligosaccharides can also reduce the risk of a fatal intestinal disorder, necrotizing enterocolitis (NEC) in preterm infants.6

Immunomodulators: HMOs have numerous immunomodulatory functions that influence infant health. Various studies have reported the presence of prebiotic oligosaccharides such as within systemic circulation and intestine of breastfed infants. They target toll-like receptors (TLRs) that are involved in the recognition of microbes and subsequent modulation of the immune response.7 For example, they decrease the LPS-TLR 4 dependent activation of cytokine IL-8 via reduction of CD14 expression and subsequent inhibition of mucosal inflammation 3. Moreover, they also maintain a balance between Th1/Th2 lymphocyte. Thus, HMOs may play a role in the development of a balanced and efficient immune response that leads to the lesser risk of infections.7

Nutrient providers for the brain: Few oligosaccharides, especially sialylated ones, may be involved in the synthesis of sialic acid-containing glycoprotein and glycolipids (gangliosides) for the development of cognitive ability and brain in infants.6

Mother’s own milk is a well-known food for infants as it provides all essential nutrients and protects against infections.5,7It contains ample amount of prebiotic oligosaccharides, an unconjugated glycans, that not only act as “bifidus factor” to support the colonization of gut microbiota but also prevent the invasion of pathogens and risk of infections.3,8 Moreover, it may also inhibit the expression of an inflammatory gene and modulate immune cell responses.3,8 Owing to the beneficial effects of these oligosaccharides on the gut and immune system, they are recognized as one of the most important elements of human milk for infants’ health.