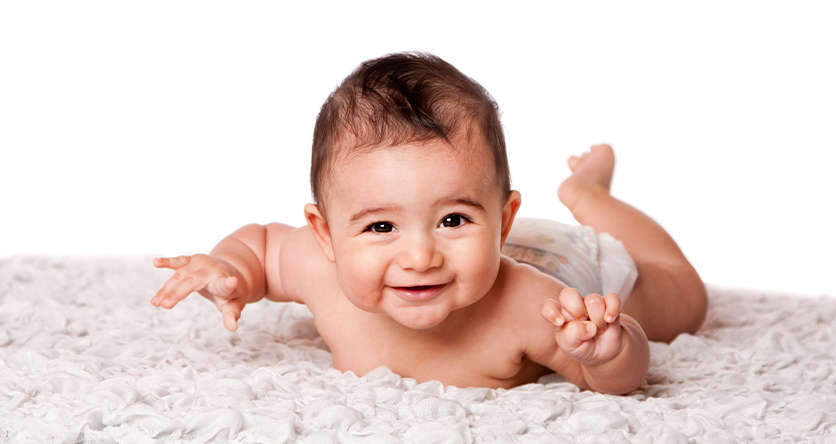 How To Boost Immunity In Infants: Role Of Prebiotics

Infants are more susceptible to develop certain infections caused by bacteria, viruses, and parasites due to inadequately developed immune systems compared to older children and adults1. This article discusses the influence of prebiotic supplementation on an infant's immune system.

An infant's immune system is functionally immature at birth and transits from innate (type 1) to adaptive immunity (type 2) after birth1,2. Type 2 immunity is responsible for establishing tolerance against infections and differentiation between friendlygut microbiota and harmful pathogens2. In the early months of life, human milk supplies the necessary bioactive components, including human milk oligosaccharides (HMOs)- the prebiotics that protect the infant during the early months of life1.

Recent evidence suggests that HMOs play an important role in building an infant's health through the stimulation of immune development, support for intestinal development, develop gut microbiome, and promotion of the barrier function1. Galactooligosaccharides (GOS) and fructooligosaccharides (FOS) are two dietary oligosaccharides having prebiotic effects similar to HMOS3. Particularly, a 9:1 ratio of GOS:FOS is increasingly studied for its beneficial health effects in infants2. Broadly, the enhancing effects of GOS and FOS on an infant's health can be categorized as follows.

Effect of GOS and FOS on Commensal Flora

The role of gut microbiota in maintaining immune and metabolic homeostasis is well-established, and modulation of beneficial gut microbiota using prebiotics like GOS and FOS has remained an area of interest in recent years4. In this context, Table 1 depicts the clinical studies involving GOS:FOS and their effect on gut microbiota.

As evident from Table 1., GOS and FOS in the ratio of 9:1 have the potential to modulate intestinal flora in infants and can produce bifidogenic effects similar to breast milk8. Evidence suggests that GOS:FOS administered at 0.4 and 0.8 g/100 ml concentration produced bifidogenic properties. Interestingly, the higher concentration of GOS:FOS (0.8 g/100 ml) produced more beneficial effect on stool characteristics without any side effects7.

SCFAs like acetate, propionate, and butyrate are the primary metabolites produced by the gut bacteria2,4. They are implicated in intestinal epithelial cell integrity, host immunity, lipid metabolism, regulation of appetite, glucose homeostasis, and immune function4. Prebiotics like GOS and FOS serve as food for gut microbiota that produces these SCFAs4. Recently, a clinical study conducted on infants reported that GOS supplementation in infants was associated with increased numbers of Bifidobacteria, augmenting the total SCFAs percentage compared to baseline9.

Further, evidence suggests that gut microbiota can produce vitamins like vitamin K2, retinol, folate, vitamin B6, and vitamin B7, which are an integral part of bone, vision, teeth, and glucose homeostasis2. Thus, it is suggested that the oligosaccharides that promote the gut microbiota which are involved in the synthesis of essential vitamins and SCFAs may have indirect beneficial health effects in the host2.

Assistance in Immunity Development During Early Years of Life

An infant’s nutritional exposure plays a pivotal role in the development and health of the majority of organ systems10. Further, evidence suggests that supplementation of prebiotics, GOS:FOS (9:1), has resulted in beneficial health outcomes in infants, as given below.

Supplementation of prebiotics like GOS:FOS (9:1) in the diet of infants during the initiation of complementary feeding could benefit gut microbiome homeostasis, thereby improving overall health and supporting the development of the infant2.