Malnutrition is common in hospitalized pediatric population.1 According to NFHS 4, in India, 38% of children under age five years are stunted (too short for their age) and 21% of children under age five years are wasted (too thin for their height).2 This is a sign of chronic undernutrition.3 Nutritional support is an important aspect in the clinical management of pediatric intensive care patients.1 Adequate nutrition during infancy and early childhood is essential to ensure the growth, health, and development of children to their full potential.4 Cumulative deficits not only lead to growth faltering but may also impact clinical and functional outcomes in these infants.5,6 Therefore, evaluation of nutritional status and provision of adequate nutrition are crucial components in the overall management of children during tillness.5 Faltering growth of organic origin occurs when an underlying medical cause results in suboptimal weight gain or growth in infants.7 Infants may have increased nutritional requirements and/or fluid restrictions due to various medical conditions, including congenital heart disease, chronic lung disease, cystic fibrosis, (athetoid) cerebral palsy, critical illness, surgical conditions, and failure to thrive.5,7

Here, we present to you a case report of a 2-month-old baby with Congenital heart disease and recurrent infections.

A 2-months-old child presented with complaints of bronchopneumonia, sepsis and cardio-respiratory failure. Patient’s weight was 2.7 kg, height was 58 cm, head circumference was 39 cm at admission.

Child was born at full term with low birth weight (2.4 kg). He suffered with neonatal jaundice and CHD. Surgical intervention was carried out to correct TPAVC. Post-operative, child developed left diaphragmatic palsy and underwent left diaphragmatic plication. Child was on oxygen therapy for prolonged period because of failed extubation. He also suffered with acute gastroenteritis (AGE) for 5 days and readmitted to the hospital in a week's time.

Child was on breastfeeding along with formula feeding with addition of medium chain triglyceride (MCT) oil.

Urine culture was positive for E-coli. Result of CBP and CRP were indicating sepsis. Patient's weight was less than that for 3rd percentiles on WHO growth chart.

Child was diagnosed to be having growth faltering due to CHD and recurrent infections (bronchopneumonia, AGE, sepsis, and urinary tract infection).

Child was admitted to the hospital. He remained in PICU for 20 days and shifted toward for next 20 days, making total of 40 days of hospitalization.

Child was on the mechanical ventilator. Ionotropic support and antibiotics were given to manage child’s condition. He was on NPO for 8 days and then started on oral feeds.

Child was showing growth faltering due to decreased intake (feeding difficulty with suck rest suck cycle, AGE and NPO status) and increased energy expenditure (critical illness, increased work for breathing due to diaphragmatic palsy and bronchopneumonia). Child was unable to gain weight from the past 2 months despite addition of MCT oil.

Aim of nutritional management was to achieve weight between 25th to 50th percentile. ENDF was started on day 4 with 50 kcal/kg/day and from next day increased to 100 kcal/kg/day for one-week period. As the child tolerated formula, the amount gradually increased to 150-160 kcal/kg/day. Every 2-hourly feed was given alternating between ENDF and expressed breast milk making total 6 feeds of ENDF and 6 feeds of expressed breast milk each day.

Child showed a weight gain of 870 g over 40 days period making his weight 3570 grams at the time of discharge.

Post-discharge, the patient was continued on ENDF through bottle feeding. At follow up after 2 weeks from discharge, the child had gained 280 grams of weight making his weight 3850 grams. Child tolerated the formula well and was thriving well with acceptable weight gain.

Total anomalous pulmonary venous connection (TAPVC) is a rare but heterogeneous anomaly, accounting for = 1% to 3% of congenital heart disease (CHD) cases. It is characterized by failure of the pulmonary venous confluence to be absorbed into the dorsal portion of the left atrium in combination with a persistent splanchnic connection to the systemic venous systems.9 Typically, TAPVC presents in infancy and often requires early surgical intervention.9,10 Post-operatively, child may develop pulmonary complications like pleural effusion, atelectasis, pneumonia and diaphragmatic paralysis.11

Repair of TAPVC in the neonatal age has been found to be rewarding with significant improvement in the well-being of the child.10 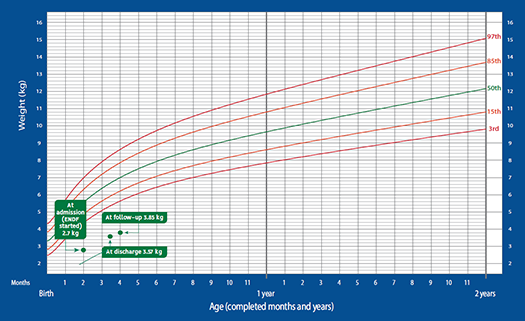 The management of newborns with CHD requires a multidisciplinary approach, in which the nutritional aspect plays a crucial role. An adequate caloric intake during either pre and post-surgical period, in fact, improves the outcome of these patients.14 However, maintaining infants with CHD in a good nutritional condition can be a challenge.15 Enteral nutrition has a favorable effect on the intestinal mucosa and has fewer complications compared with parenteral nutrition.13

The Breast milk is considered as an ideal nutrition for all newborns upto the age of 6 months. However, caloric intake of mother's milk may not be enough to support growth of infants affected by CHD.14 Several studies have reported the judicious use of higher concentration formula in alleviating growth failure in children with CHD.12 In a study by Clarke SE et al., all 49 infants [median age of 5 weeks (range 2-3 weeks)] with faltering growth gained weight with ENDF. Intake of ENDF also resulted in significantly greater intakes of all nutrients; protein, sodium, potassium, calcium, zinc, iron, vitamin D, vitamin C and Vitamin A.7

In the case presented here, child was showing growth faltering due to CHD and recurrent infections. He was unable to gain weight with breast feeding and formula feeding with added MCT oil, therefore started on Energy and Nutrient Dense Formula (ENDF). ENDF along with expressed breast milk led to satisfactory weight gain. Use of ENDF can be considered as one of the important measures in critically ill children suffering from recurrent infections.

We can conclude that ENDF can help in weight gain in children with CHD and recurrent infections who are not thriving well.