Acute respiratory distress syndrome manifests as rapidly progressive dyspnea, tachypnea, and hypoxemia.1 It is considered as one of the most common causes of atelectasis.2 The presence of long-term atelectasis can induce secondary infection or worsen the original infection, causing bronchial damage and inflammatory secretion retention, leading to bronchiectasis or emphysema as time passes.3

Malnutrition is prevalent in critically ill infants with acute respiratory distress syndrome.4 One out of every two children in the pediatric intensive care unit will develop malnutrition or have worsening of baseline malnutrition and present with specific micronutrient deficiencies.5 Malnutrition adversely affects lung function by diminishing respiratory muscle strength, altering ventilatory capacity, and impairing immune function.6 Therefore, Nutrition should be considered a primary rather than supportive therapy for pediatric acute respiratory distress syndrome.5

Here, we present a case of a 20-day old infant suffering with recurrent atelectasis due to respiratory distress and not thriving well.

A 20-day old female infant presented with chief compliant of recurrent atelectasis and was showing faltering growth. Her weight was 2.8 kg.

Infant was born at term with antenatal diagnosis of situs inversus totalis. Her birth weight was 3.2 kg. She developed respiratory distress along with cyanosis within an hour after birth and therefore ventilated.

Child was on partial parenteral nutrition and expressed breastmilk 20 ml/kg/day. Infant had lost 400 g of weight by day 20 and therefore started on 100 ml/kg/day of expressed breastmilk along with term formula and continued partial parenteral nutrition to provide 100 kcal/kg/day. Feed volume couldn’t increase further due to gastroesophageal reflux disease (GERD).

Infants’ weight was less than that for 3rd percentiles on WHO growth chart.

Infant was diagnosed to be suffering from faltering growth due to recurrent atelectasis.

Since infant was suffering from recurrent atelectasis; she was unable to wean off from the ventilator. She was in the catabolic state. There was increased caloric requirement due to tachypnea. Airway defects were causing oral motor swallowing problems.

Aim of the nutritional management was to achieve significant weight gain. In addition to weight gain, conservative management was also required to reduce the effect of tracheal bronchus and airway anomalies to counter increased work of breathing.

The recommend caloric intake was 125 kcal/kg/day. Infant therefore started on energy and nutrient dense formula (ENDF) 100 ml/kg/day (100 kcal/kg/day) from day 23 in addition to breast feeding. Total 4 to 6 feeds were given per day. The amount was gradually increased to 120 kcal/kg/day. Pantoprazole was given to prevent any symptoms of GERD. By day 40, infant gained 500 g of weight making her weight 3.3 kg with improvement in atelectasis. By day 50, she was extubated to CPAP and her weight was 3.6 kg. Infant was discharged from hospital by day 60 and her weight was 3.9 kg.

ENDF was continued post dischrge along with breastfeeding and energy dense solids. By 8 months of age, infant’s weight was 6.7 kg and was thriving well. No emergency room visit was observed within last 4 months. 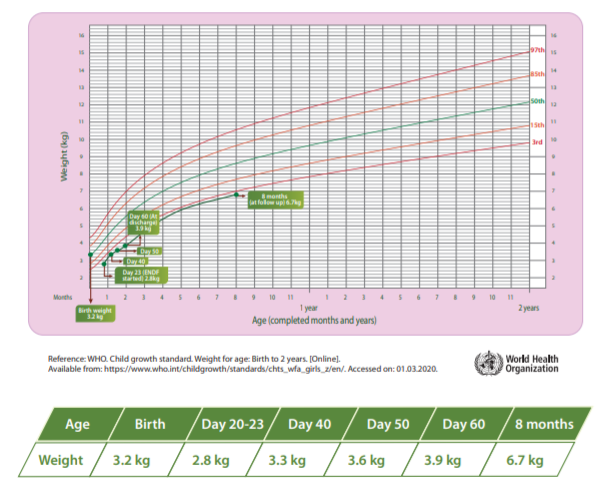 Respiratory distress syndrome is one of the most common causes of atelectasis in the neonatal period. In neonates, pulmonary parenchyma is not yet fully formed, undergoing the remodeling that will finalize the development of the capillaries and alveoli.2 Development of atelectasis is associated with decreased lung compliance, impairment of oxygenation, increased pulmonary vascular resistance, and development of lung injury.7

Nutritional issues are increasingly recognized in the course of respiratory diseases, from primary prevention to advanced disease care.8 Malnutrition is prevalent in critically ill infants with acute respiratory distress syndrome.4 Cumulative deficits of energy, protein and micronutrients not only lead to faltering growth but may also impact clinical and functional outcomes.9,10,11

Therefore, to overcome nutritional issues, energy and nutrient dense formula (ENDF) can be given to critically ill infants. ENDF provides increased intake of all nutrients in a balanced form which can help to promote weight gain and linear growth. It is also safe and well tolerated.12

In the case presented here, infant was suffering from recurrent atelectasis and was unable to gain weight. Infant needed increased caloric intake (125 kcal/kg/day). Increasing feed volume with expressed breast milk and term formula was not possible due to GERD. Infant therefore started on ENDF along with breast feeding which led to significant weight gain. Use of ENDF can be considered as one of the important measures in critically ill infants suffering with recurrent atelectasis.

We can conclude that ENDF can help in weight gain in infants with recurrent atelectasis who are not thriving well.