A Case Study of a Preterm Infant With Feeding Intolerance

A32-week preterm male infant was brought to the unit with the chief complaint of vomiting. The infant's Father works as a software engineer, while his mother works as a teacher. The infant is the couple's firstborn.

Only breast milk and ONS

IV fluids and partial parenteral nutrition (mainly amino acid & dextrose) was initiated on 2" day and continued till the time infant reached 50% volume (around 10-12mL and was discontinued post that) and expressed breast milk (EBM) was given to the infant during NICU.

Note: EBM quantity was increased progressively from 3ml/3hrly, and maximum EBM tolerated by the infant was up to 15-18ml/2hrly (same as preterm feed). Up to 8 feeds/12 feeds were given/day. EBM was continued post-discharge for few days, but as the mother was tired, she could not express her milk and the milk quantity also reduced so the infant was started with preterm Feeds.

The infant has switched to prebiotic-containing preterm Feeds twice a day during hospitalization (feed was increased progressively from 3ml/3hrly and the maximum tolerated by the infant was up to 15-18ml/2hrly. The feed was mostly given at night-time to ensure that the mother get adequate rest).

The infant was not only breastfed, but was also advised prebiotic containing preterm feeds to meet his daily nutritional requirements.

No special nutrition is required other than prebiotic-containing preterm Feed with vitamin D drops. 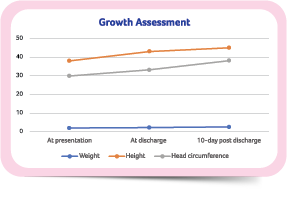 Insufficient breastfeeding and lack of appropriate nutrition led to feeding intolerance. Breastfeeding is the best source of nutrition for most infants and should be promoted, supported, and protected at all times. In rare cases, for example, infants with galactosemia or primary lactase deficiency, the HCP can advise the mother on the suitable course of action..

Preterm feed differs not only in nutritional value but also in acceptance and tolerance. Prebiotic-containing preterm feed has a composition of whey:casein (60:40) that is similar to that found in human milk, which aids digestion and supports overall gut health of the a preterm infant. Galactooligosaccharides (GOS) and Fructooligosaccharides (FOS) (9:1) prebiotic mixture can help modulate gut microbiota, promote gut maturation, and help maintain intestine epithelial permeability in preterm infants.

*Conclusion is for this particular case study and not arbitrarily applicable to all.

Important Notice: Mother's Milk is Best for your Baby:

The World Health Organization (WHO)* has recommended that pregnant women and new mothers be informed of the benefits and superiority of breast-feeding, in particular, the Fact that it provides the best nutrition and protection from illness for babies. Mothers should be given guidance on the preparation for and maintenance of lactation, with special emphasis on the importance of the well-balanced diet both during pregnancy and after delivery. Unnecessary introduction of partial bottle Feeding or other foods and drinks should be discouraged since it will have a negative effect on breast-feeding. Similarly, mothers should be warned of the difficulty of reversing a decision not to breastfeed. Before advising a mother to use an infant formula, she should be advised of the social and financial implications of her decision. For example, if a baby is exclusively bottle-fed, more than one can (500g) per week will be needed, so the family circumstances and cost should be kept in mind. Mother should be reminded that breast milk is not only the best but also the most economical food for babies. If a decision to use infant formula is taken, it is important to give instruction on correct preparation methods, emphasizing that unboiled water, unsterilized bottles or incorrect dilution can lead to illness.

Importance of Breastfeeding: (i) Immediately after delivery, breast milk is yellowish and sticky. This milk is called colostrum, which is secreted during the first week of delivery. Colostrum is more nutritious than mature milk because it contains more protein, more anti-infective properties which are of great importance for the infant's defense against dangerous neonatal infections. It also contains higher levels of, Vitamin 'A’, (ii) breast milk- A) is, a complete and balanced food and provides all the nutrients needed by the infant [for the first six months of life] (B) has anti-infective properties that protect the infants From infection in the early months (C) is always available; (D) needs no utensils or water (which might, carry germs) or fuel for its preparation, (iii) breastfeeding is much cheaper than feeding infant milk substitutes as the cost of the extra food needed by the mother is negligible compared to the cost of feeding infant milk substitutes, (iv) mothers who breast-feed usually have longer periods of infertility after child birth than non-lactators; (b) details of management of breast feeding, as under:- (i) breast-feeding- (A) immediately after delivery enables the contraction of the womb and helps the mother to regain her figure quickly; (B) is successful when the infant suckles Frequently and the mother wanting to breast-feed is confident in her ability to do so (ii) in order to promote and support breast-feeding the mother’s natural desire to breast feed should always be encouraged by giving, where needed, practical advice and making sure that she has the support of her relatives. (iii) adequate care for the breast and nipples should be taken during pregnancy. (iv) it is also necessary to put the infant to the breast as soon as possible after delivery, (v) let the mother and the infant stay together after the delivery, the mother and her infant should be allowed to stay together (in hospital, this is called "rooming-in’); (vi) give the infant colostrum as it is rich in many nutrients and anti-infective factors protecting the infants from infections during the few days of its birth; (vii) the practice of discarding colostrum and giving sugar water, honey water, butter or other concoctions instead of colostrum should be very strongly discouraged; (viii) let the infants suckle on demand; (ix) every effort should be made to breast-feed the infants whenever they cry; (x) mother should keep her body and clothes and that of the infant always neat and clean.

Breast milk is best for babies. At Danone, we support breast Feeding and believe that breast milk is the best food for babies as the sole source of nutrition for the first 6 months of life and is recommended to be continued until 2 years with the introduction of appropriate complementary foods after 6 months of age.

Breastfeeding is the best for babies and a healthy diet / maternal nutrition is important when breastfeeding. A decision not to breastfeed can be difficult to reverse. Infant formula is suitable from birth when babies are not breastfed. It is recommended that all formula milks be used on the advice of a doctor, midwife, health visitor, public health nurse, dietitian, pharmacist, or other professional responsible for maternal and child-care and the financial implications should be considered. All preparation and feeding instructions should be followed carefully as inappropriate preparation could lead to health hazards.

For Healthcare Professionals use only - not for distribution to the general public.