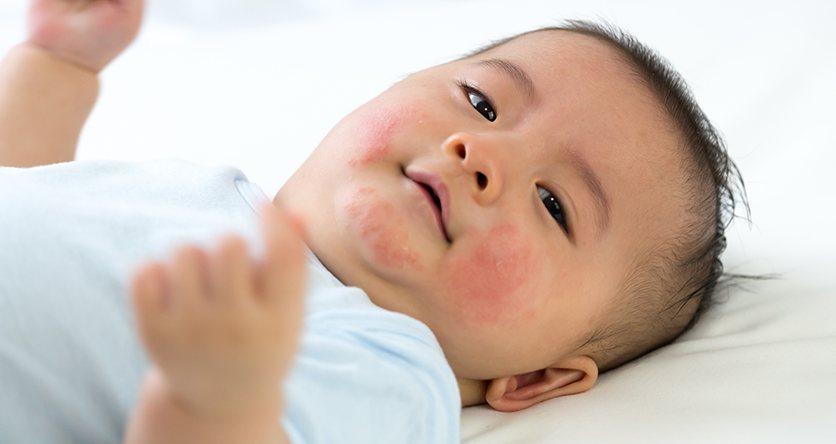 Why hypoallergenic feed is beneficial for infants with CMPA

Infants are at an increased risk of developing food allergies due to immature gut microbiota. Research has shown that gut microbiota has a direct impact on the rapidity of tolerance development towards various allergens.1 Human milk oligosaccharides (HMOs) can exert immunogenic effects and maintain gut health. 2 Prebiotics GOS/FOS in infant feeds could mimic the beneficial effect of HMO 3 and may useful in children with Cow’s Milk Protein Allergy (CMPA).

Amongst the most common food allergies, CMPA is seen to affect children below 1 year of age.4,5 It often manifests in infants within one week after the introduction of cow’s milk protein.6 The worldwide prevalence of CMPA is usually between 2-5%.5 Whereas in India, it affects 1.5- 3% of children during the first year of life.7 Evidence suggests that altered microbial signature and aberrant immune responses play an important role in the pathogenesis of allergy.8

Type of feeding influences the gastrointestinal bacterial growth which has been associated with immune responses and tolerance development.9 One of the key ingredients of infant feed is prebiotics that promotes the development of the right type of infant gut bacteria thereby strengthening the intestinal mucosal immune system.2 Hence, in non-exclusively breastfed infants, switching to hypoallergenic feed containing prebiotic mixture fructo-oligosaccharides (FOS) and galacto-oligosaccharides (GOS) may help in the management of CMPA.10

CMPA is an immunological response of the body to the protein found in cow’s milk. Almost 90% of the children diagnosed with CMPA in infancy can develop tolerance to cow’s milk protein by three years of age.11 Although IgE is not a diagnostic marker of CMPA; the level of IgE in the body is seen to influence the speed of tolerance development.11 Lower levels of IgE induce rapid development of tolerance towards cow’s milk protein.7 Therefore, hypoallergenic feed containing low allergenic peptides that reduce IgE levels are more preferred in the treatment of CMPA for infants.11 Hypoallergenic feed is described by the American Academy of Pediatrics as a feed that can effectively treat at least 90% of the children with CMPA, with a confidence interval of 95%.12

Studies established the role of intestinal microorganisms’ in influencing tolerance and shaping the outcomes of food allergies during infancy13. Food allergies modulate gut flora that impacts the ability to acquire tolerance towards causative antigens.1,11

The advent of atopic dermatitis in infants is typically seen to be followed by rhinoconjunctivitis, wheezing, and asthma coined the ‘pediatric allergy march’.15 Multiple studies have reported that the onset of ‘allergy march’ in infants can be delayed by altering the gut microbiota profile by the early dietary intervention.10

Araslanoglu et al. (2007) have progressively studied and successfully demonstrated the immunomodulatory effect of prebiotic containing infant feeds. They reported a significant reduction in the incidence of atopic dermatitis and various infections in high-risk infants following dietary intervention for 6 months.16

They also demonstrated that the immunomodulatory impact of early intervention with a mixture of short- and long-chain oligosaccharides in the first 2 weeks of life. Reduced incidence of atopic dermatitis and various infections was noted well after 18 months of ceasing the intervention. During the first 2 years of life, infants on the intervention had significantly fewer episodes of upper respiratory tract infections, fever episodes, and need for antibiotics.17

In this same cohort of infants, they further demonstrated that the protective impact of the dietary intervention was long-lasting for five years. The study inferred a cumulative reduction in the 5-year incidence of atopic dermatitis from 38% to 19% (50%) and allergic presentations reduced by 80%.10