Cytomegalovirus is one of the most common causes of congenital infection. Most of infected infants will remain asymptomatic, but about 10% of infected newborns will have symptomatic disease and 10–15% will develop problems during the first 6 years of life. Symptoms of cytomegalovirus infection include growth restriction, microcephaly, seizures, hepatitis syndrome, thrombocytopenia, anemia, and pneumonitis.1

Here we present a case of 3-month-old infant suffering with cystic fibrosis and cytomegalovirus infection and not thriving well.

A 3-month-old male infant presented with chief complaint of cystic fibrosis and cytomegalovirus infection. He was not thriving well. At admission, his weight was 2.9 kg, height was 48 cm, head circumference was 35 cm and mid-upper arm circumference was 8.3 cm.

Infant was born through normal vaginal delivery. He was not gaining significant weight. By the end of one-month, his weight was similar to the birthweight (2.9 kg).

Infant was on breastfeeding. Since, he was unable to gain weight therefore started on formula feeding in addition to breast milk.

Both sweat chloride test and PCR came out positive. Infant was diagnosed to be suffering with cystic fibrosis and cytomegalovirus infection. CBC report revealed severe anemia and thrombocytopenia.

Since patient’s weight was less than 3rd percentile on WHO growth chart, he was found to be suffering from severe faltering growth.

Infant was hospitalized for period of 10 days. He was started on breastfeeding and energy and nutrient dense formula (ENDF) top ups. Around 50ml/kg/day of ENDF were given every 3 hourly. Total 7-8 feeds were given per day. Infant tolerated the formula well and started gaining weight by day 6 of hospital stay. Infant gained 500 g of weight over a 10 days period making his weight 3.4 kg at the time of discharge.

ENDF was continued post discharge along with breastfeeding. Infant was started on weaning food from 5th month of age. Especial diet was advised for managing cystic fibrosis.

Infant gained 2.2 kg of weight making his weight 5.6 kg at 6 months. His growth and development improved significantly. Infant’s height was 55 cm, head circumference was 40 cm, and mid upper arm circumference was 10 cm. He was able to hold neck and turn over. 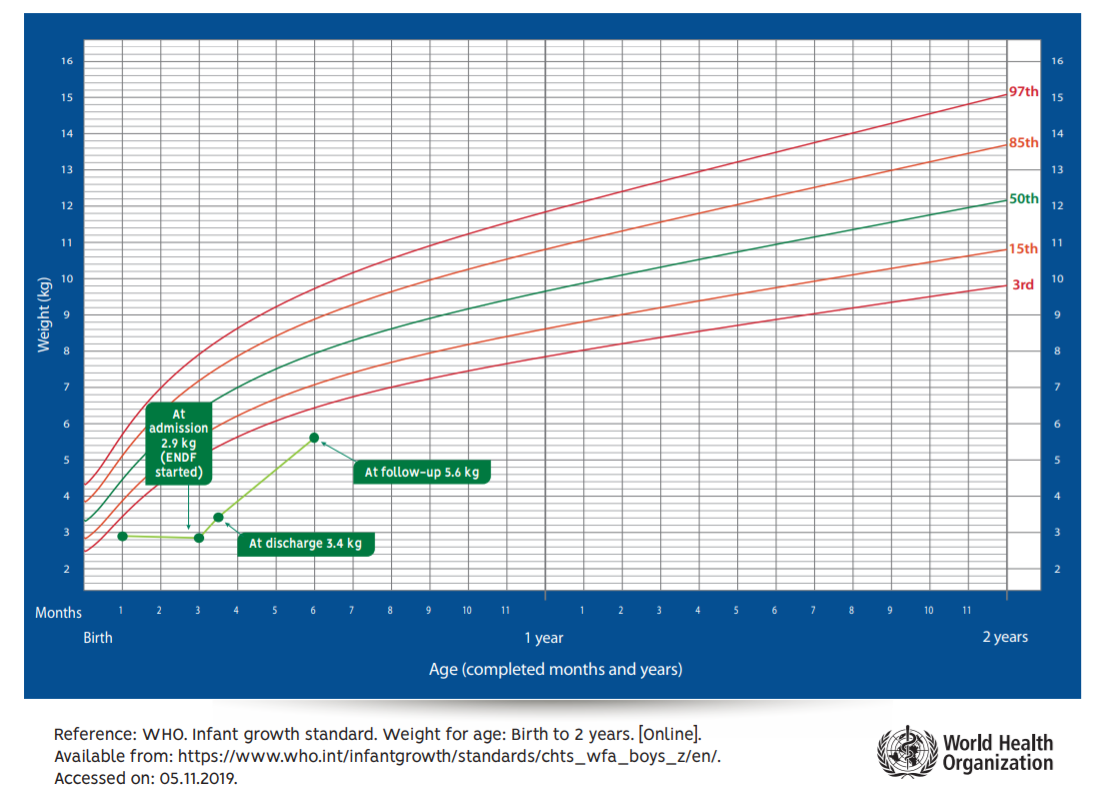 Cytomegalovirus, a member of the human herpesvirus family, is the most common viral cause of congenital infection, affecting 0.2–2.2% of all live births. It is responsible for significant morbidity, especially in infants who are symptomatic in the neonatal period.6 Early cytomegalovirus infection, namely in utero or during early infancy, may contribute to reduced growth, altered or impaired immune functions, and sensory and cognitive deficits.7

Cystic fibrosis causes thickening of mucous that primarily affects the pulmonary and gastrointestinal systems. Thickening of the airway mucous blocks gas exchange and provides a growth medium for bacteria, which then leads to airway inflammation and infection, causing permanent lung damage, chronic sinus problems, or both. In the gastrointestinal system, the thickened mucous decreases pancreatic enzyme secretion into the intestine and absorption of nutrients, causing problems with malabsorption that can lead to malnutrition.8

In infants with cystic fibrosis, poor nutritional status results in stunted growth, as detected by low weight- and height for- age percentiles. If untreated, such cystic fibrosis-related undernutrition in infancy can lead to the serious consequence of impaired cognitive function. In cases of severe undernutrition in infants, lung function worsens markedly, and survival is poor.9

Initiation of nutritional management should begin as early as possible after diagnosis. Energy intake should be increased for breastfed infants who have poor weight gain despite efforts to optimize pancreatic enzyme replacement therapy by providing more frequent feedings and fortifying expressed breast milk. For formula fed infants, energy and protein intake can be increased by using high-energy/protein infant formula.9 Energy and nutrient dense formula (ENDF) may help in weight gain in infants with faltering growth. In a study by Clarke SE et al., all 49 infants [median age of 5 weeks (range 2-31 weeks)] with faltering growth gained weight with ENDF. Intake of ENDF also resulted in significantly greater intakes of all nutrients, protein, sodium, potassium, calcium, zinc, iron, vitamin D, vitamin C and vitamin A.10

In the case presented here, infant was showing faltering growth due to cystic fibrosis and cytomegalovirus infection. He was unable to gain weight with breast feeding and regular formula feeding. Infant therefore started on ENDF along with breastfeeding. ENDF led to satisfactory weight gain. Use of ENDF can be considered as one of the important measures in infants who are not thriving well.

We can conclude that ENDF can help in managing infant with faltering growth. Nutritional management is of utmost importance in any failure to thrive case. In infants less than 6 months, where solids are not an option, giving ENDF would be of great benefit.